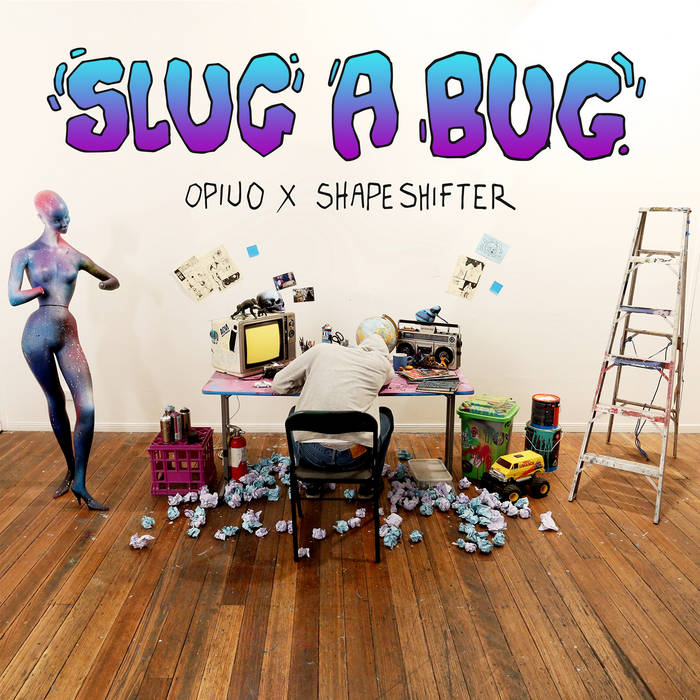 In their never-ending search for new textures and tones to work with, Shapeshifter has never been shy about drawing in new friends and frequencies to expand their sound palette.

Now, for their latest bass odyssey, they’ve called upon the multihued beat making talents of "funkadelic bass music proponent, Opiuo, to cook up the Slug A Bug EP.

On Slug A Bug’s title track, Shapeshifter and Opiuo mash up a dirty bassline, mozzie-like synth stabs, soul claps, squelching keys and a wailing guitar riff – all set ablaze by the unmistakable voice of P-Diggsss. And B-siding the EP is ‘Warehouse Be Like’, a choppy roof-raising party starter, again featuring Diggsss, which oozes fun.

This isn’t the first time Shapeshifter has crossed paths with ex-pat Kiwi bass fiend, Opiuo; he previously turned in a deliciously fruity remix of their track ‘Monarch’, plus a supremely bass-heavy take on ‘Longest Day’. They’re also touring bros, having linked for a 2013/2014 summer run through crucial North Island destinations.

The Slug A Bug EP though is their first true musical meeting of minds, a collaboration that carves out space between Shapeshifter’s speaker-rattling bass adventures and Opiuo’s funk-fuelled glitch.

Shapeshifter by name and by nature, this elemental, electronic soul outfit has morphed time and time again with seismic shifts in genre – from depth-charge bass music, elastic electronic textures and barrelling breakbeats to bedrocks of soul, jazz and rave that ground their experimentation. ... more

Bandcamp Daily  your guide to the world of Bandcamp

outré black metal, with a Victory Over the Sun interview and music from Liturgy and Jute Gyte.